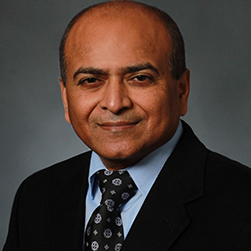 Positions Held: Dr. Vasant Honavar received his Ph.D.  in 1990 from the University of Wisconsin Madison, specializing in Artificial Intelligence. Honavar is currently a Professor of Information Sciences and Technology (IST),  Computer Science and Engineering, Bioinformatics and Genomics, Neuroscience and Operations Research at Pennsylvania State University. He currently holds the  Edward Frymoyer Endowed Chair  of IST. He is also the founding Director of the Penn State Center for Artificial Intelligence Foundations and Scientific Applications and the Center for Big Data Analytics and Discovery Informatics, Associate Director of the Institute for Computational and Data Sciences, and Co-Director of the NIH-funded Biomedical Data Sciences PhD program, and Informatics lead (research) for the NIH-funded Clinical and Translational Sciences Institute.  In 2016, Honavar was appointed as the Sudha Murty Distinguished Visiting Chair of Neurocomputing and Data Science at the Indian Institute of Science. Prior to joining Pennsylvania State University, Honavar served on the faculties of Computer Science, Bioinformatics and Computational Biology, Neuroscience, and Human-Computer Interaction at Iowa State University (1990-2013) and as a program director in the Information and Intelligent Systems Division of the National Science Foundation (NSF) (2010-2013) where he led the Big Data Science and Engineering Program and contributed to multiple other programs.

Research: Honavar's current research and teaching interests include artificial intelligence (especially machine learning, causal inference, knowledge representation), computer science, data sciences, cognitive and brain sciences, and applied informatics (especially bioinformatics, health informatics). Honavar's research has resulted in foundational contributions in these areas (documented in over 250 peer-reviewed publications, that have been cited approximately 16,000 times (H-index = 58). Honavar has served as a principal or co-principal investigator on grants totaling over $60 million during 1990-2020 from the National Science Foundation, the National Institutes of Health, the US Department of Agriculture, the US Department of Defense, and the National Security Agency.

Teaching and Curriculum Development, and Student Mentoring: Honavar has developed and taught graduate and undergraduate courses in Computer Science, Artificial Intelligence, Machine Learning, Causal Inference, Data Sciences, Bioinformatics, Health Informatics, Materials Informatics, and related areas. He has directly mentored the research-based training of 10 Postdoctoral Research Associates, 36 PhD students (in Computer Science, Bioinformatics, and Neuroscience) and 30 MS Students, and many undergraduates all of whom have gone on to pursue successful careers in academia or industry. He is currently working with 1 Postdoctoral Research Associate, 8 PhD students  and several MS Students(drawn from Computer Science and Engineering, Information Sciences and Technology,  Bioinformatics and Genomics, and Neuroscience Programs).

Leadership and Professional Service: At Pennsylvania State University, Honavar led the establishment of the Center for Artificial Intelligence Foundations and Scientific Applications, to pursue foundational and applied research in artificial intelligence (especially machine learning, human-ai interaction, knowledge representation, and related topics) to accelerate science across several scientific disciplines, the Center for Big Data Analytics and Discovery Informatics, to pursue fundamental as well as translational research in the data sciences. These centers coalesce faculty expertise in computer science, informatics, statistics on the one hand and life sciences, health sciences, physical sciences, social sciences, on the other to pursue transformative interdisciplinary research at the interface between the two. He co-led the establishment of a new innovative inter-college undergraduate degree program in Data Sciences, that combines foundational training in Computing, Informatics, and Statistics together with exposure to least one application domain (e.g., Life Sciences, Social Sciences, Health Sciences, Physical Sciences); an innovative Biomedical Data Sciences interdisciplinary PhD training program in Biomedical Data Sciences (funded by an NIH BD2K T32 predoctoral training grant), drawing on faculty expertise across 5 different colleges (Science, Information Sciences and Technology, Engineering, Health and Human Development, Medicine) across two different campuses (University Park, Hershey). Honavar served as a member of the Computing Community Consortium Council (CCC) where he chaired the Convergence of Data and Computing Task Force (2015-2017) was a member of Artificial Intelligence and Health IT task forces.  Dr. Honavar is a Co-PI of the North East Big Data Innovation Hub, a consortium of academic, industrial, and non-profit organizations focused on transformative translational data science research and applications in areas of national or societal importance. He served on its Executive Committee during 2016-2020. Honavar currently serves on the steering committee of the Eastern Regional Network, a consortium of academic institutions focused on developing computing and data infrastructure for scientific collaboration across institutional and disciplinary boundaries.   He  also served as a member of the Electorate Nominating Committee of the Section on Information, Computing, & Communication of the American Association for the Advancement of Science (AAAS). Honavar has served on, or currently serves on the editorial boards of several journals including IEEE/ACM Transactions on Computational Biology and Bioinformatics, Springer Open Journal of Big Data, Journal of Computational Systems Biology, Cognitive Systems Research, Machine Learning, the Journal of Bioinformatics and Biology Insights, the International Journal of Semantic Web and Information Systems, the International Journal of Computational Biology and Drug Design, the International Journal of Computer and Information Security, and the International Journal of Data Mining and Bioinformatics among others.  Honavar is Program Co-Chair of the 2022 AAAI Conference on Artificial Intelligence. He is a member of the  FDA MDEpinet Blockchain and Artificial Intelligence Task Force. He served as a general co-chair of the 2014 IEEE International Conference on Big Data in 2014 and the program co-chair of 2014 IEEE Conference on Bio and Medical Informatics. Honavar regularly serves on the program committees of major research conferences in artificial intelligence, machine learning, and bioinformatics including the Conference on Artificial Intelligence (AAAI), International Conference on Machine Learning (ICML), ACM SIGKDD Conference on Knowledge Discovery and Data Mining (KDD), SIAM Conference on Data Mining (SDM), IEEE Conference on Data Mining (ICDM), Intelligent Systems in Molecular Biology (ISMB), ACM Conference on Bioinformatics and Computational Biology (ACM-BCB), among others. Honavar has served on multiple NIH Study Sections and including a charter member of the National Institutes of Health study section on Biological Data Management and Analysis (2002-2007). He currently serves on the Board of Directors for ACM Special Interest Group on Bioinformatics.

Selected Honors and Awards: Honavar was elected as Fellow of the American Association for Advancement of Science (AAAS) for his contributions to research and leadership in data science in 2018. Honavar has received many other awards and honors during his career including the Association for Computing Machinery (ACM) Distinguished Member award for outstanding scientific contributions to computing, the National Science Foundation Director’s Award for Superior Accomplishment in 2013 for his leadership of the NSF Big Data Program, the National Science Foundation Director’s Award for Collaborative Integration in 2011, the Pennsylvania State University College of Information Sciences and Technology Senior Faculty Excellence in Research Award in 2016, the Sudha Murty Distinguished Visiting Chair in Neuroscomputing and Data Science at the Indian Institute of Science in 2016, the Edward Frymoyer Endowed Chair in Information Sciences and Technology at Pennsylvania State University in 2013, Iowa Board of Regents Award for Faculty Excellence in 2007, the Iowa State University College of Liberal Arts and Sciences Award for Career Excellence in Research 2008, and the Iowa State University Margaret Ellen White Graduate Faculty Award in 2011. However, his proudest accomplishments are the 36 PhD students, 30 MS Students, and many undergraduate researchers that he has worked with and mentored during his career.

Additional information about Honavar's current research and teaching interests, publications, projects, etc. can be found on Honavar's web page and on his CV.

My ongoing research is focused on: